Turku Castle is mentioned in historical sources for the first time in 1308 together with the castles of Hameenlinna and Viipuri, although its oldest stages are associated with a reference from the 1280s to one Carolus Gustav who had the title of "praefectus Finlandiae". In 1318 the Chronicle of Novgorod mentions the castle, and from 1324 to 1326 Matias Kettilmundsson maintained a luxurious court there. The castle's first major siege is associated with the ascendancy of Albrecht of Mecklenburg in 1365, in which connections it may have suffered considerable damage. The outer bailey is mentioned for the first time in historical sources in 1463, and sources from 1505-1507 mention the collapse of the wall next to the river and of the construction of a new wall.
In the 16th century Turku Castle was involved more often in armed conflicts, first in 1520-21 and again in 1523, when King Gustavus Vasa of Sweden gained control of the castle and subsequently of all Finland. In 1556 the castle became the centre of the duchy ruled by Duke Johan and at the same time one of the castle's most active periods of construction came under way. Duke Johan's term came to an end in 1563, but the castle, and the outer bailey in particular, was actively built until the close of the 16th century. As late as the 1650s it was the residence of Governor-General Per Brahe, after which ist role as the administrative centre of the country passed into history. The repairs and investigations of the castle began in the early 1900s.(Kari Uotila)

Turku Castle, the oldest building steps take place in 1200-1300 century when the rocky island is built on a stone perimeter wall and both ends of the tower buildings, of which the sea (western) has been initially oriented gate Tower. Encircling walls had two smaller gates and perimeter wall of the inside of the residential building was built in stone, and possibly a chapel.
In 14 th -century within the castle walls were raised, and the inside of the castle was built facility, and residential buildings. Yard area was divided into western main castle and eastern bailey . In bailey was located in the castle chapel. The late 1300s has also started the construction of a large eastern bailey, and it was completed in the beginning of 15th century.
In the 15th castle was expanded to the east, and the East tower of the castle was used as a gate tower. At the same time the east of the castle Room facilities were increased and renewed.
The 1500s the castle was a large building phase, which culminated in the main castle on the top floor renaissance-style built-in banquet floor. (Kari Uotila)

1.,Standing main castle (stone) and outer baileys (stone and brick). In the main castle there are two big towers (eastern one as a gate tower) and in eastern outer bailey there is one round gun tower, one gate tower and one corner tower. Main castle included residential part, hall, two churches and living rooms from 14-16 th c. Big restoration has been done in the rooms. (Kari Uotila) 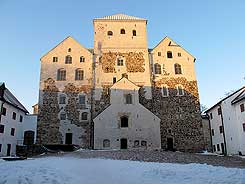