The castle of Kastelholm is mentioned for the first time in sources in 1388. In 1434 it was the only castle in Finland to be involved in the Engelbrecht uprising, being taken by Erik Puke. The artillery pieces of Kastelholm were removed 1504, and some of the walls were torn down. The castle was invaded and burnt down by Danish troops in 1507. Kastelholm was rebuilt in from 1514 to 1518 it was under the command of Hemming Gadd. The castle was renovated during 1500s, but it suffered a fire in 1619. Kastelholm finally lost ist role as a castle in 1634 and it burned again in 1745. Conservation were launched in 1891. (Kari Uotila)

The only medieval castle of Åland is mentioned for the first time in 1388 as "Kastelholm House." The castle was originally established on an islet and it was changed and extended successively from the 14th until the 17th century.

Kastelholm consists the main castle and northern outer bailey. Bailey is about twice the width of main castle. Main castle dimensions of approximately 30 × 20 meters, bailey had two towers of about 45 × 25 meters. The castle was originally founded on the island (about 1.7 hectares) of coastal line outside the castle went around two or three rows of piles to prevent the invasion. Most striking part of the castle is a high tower, which stands in the middle of the castle. Course of the tower is also a leading port to the bailey. At using time, the gate is probably located in the drawbridge. In main castle is in addition to a three-story wing of the residental building. In the castle has also been a chapel. (Kari Uotila) 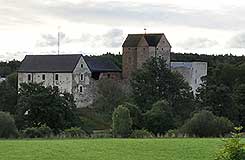