The episcopal manor and residence of Kuusisto is mentioned in sources for the first time in 1295, and in 1318 it was destroyed by the Novgorodians. Early 14th-century bishops issued a large number of letters concerning their manor (curia) and the term castrum is first used in the early 15th century. In the 1480s there was a major fire at Kuusisto, after which rile castle was refurbished. In 1521, Bishop Arvid Kurki, the last resident, fled from the Danes, and in 1523 Kuusisto was taken by Swedish troops. In 1528 King Gustavus Vasa ordered Kuusisto to be torn down, and the site soon began to fall into ruins. Excavations at Kuusisto commenced in 1877.(K. Uotila)

In early 14 th century castle furnished with stone walls on the crown of a high rock. A part of the castle yards structures were already built of stone, but apparently rather low. There were, perhaps, two towers in the castle, and even these were rather modest in size. The castles level of military fortification was not sufficient in 1318 to repel the novgorodian attack. (K. Uotila)

During the 14th century, significant construction work was done at the castle, the most interesting of which is the walled tower or residential building in the northern part of the castle, which had already been demolished during the Middle ages. The main gate was in this period in eastern part of castle and connected to water.

By the beginning of the 15th century at the latest, the role of the castle had already changed when the palace phase of the site was constructed. The castle could have been changed into a residential castle.

The conflagration of the 1480s destroyed the castle once, and reconstruction may have continued up until the 1520s. During these years, the castles many residential features were walledover and in their stead a strong defensive structure was built to repel ground troops.

.
It is conceivable that the castles role was rapidly changing from the earlier ducal castle toward a
defensive castle against some inner or outer enemy. The bishop was very strong player in political
field at the time and he probably needed his own very modern (round gun tower) and defensive castle to show and use this power.

The castle´s history ended in an official demolition order by king Custavus Vasa in 1528.

Archaeological excavations carried out at kuusisto castle since the 1870s have focussed on the outer defences and the rooms of the main castle requiring repair. Not until the end of the 1990s and the beginning of the 21st century were the first extensive excavations done in the courtyard of the main castle. (K. Uotila) 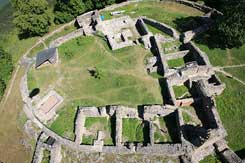